We live in an age of so-called globalization, defined as "The development of an increasingly integrated global economy marked especially by free trade, free flow of capital, and the tapping of cheaper foreign labor markets." (Merriam-Webster Dictionary)

But globalization is much more than an economic force. Cultural and political globalization is going on also, due to media of all kinds; movies, television, internet, and social networks. Fashions in clothing, language, and politics are advancing with the world's youth at high speed. This causes many political leaders in the West - and the masses they influence - to think we will eventually live in a borderless world with the same ideas and ideals governing us all. Bill Gates has spoken, "The internet is becoming the town square for the global village of tomorrow." European Union-style socialist government will provide for everyone. Peace will reign. The Dalai Lama says, "we'll all be one global community." (Link)


This is a dangerous delusion. Do you want to be just like everyone else? And your family to be like all others? Do you want all nations to be reduced to a bland sameness? Cities like Vienna, Prague, London, and Budapest are already becoming very much alike, and boring. The same global corporations splash their logos everywhere, and the tourists and residents look more and more alike. Their unique qualities are being swallowed up. The same ugly, nonsensical graffiti and Guy Fawkes images predominate. (Link)

There is resistance to this outside of Europe. The cultures of Asia, the Middle East, and Africa differ profoundly from the West and from each other. In Africa, Boco Haram and ISIS have linked up to take that continent, bathe it in blood, and purge it of Western influences. Bill Gates didn't ask Africans and others outside his elite orbit what they thought about his global village idea.

China is never going to accept Western laws and ideals as we know them, nor is Russia, nor any dedicated Islamic nation. Sunni Muslims have battled Shia Muslims since Muhammad died in the 7th Century. They both agree that non-believers - the other five billion of us - have no right to live. All these ethnic groups have radically different expectations and customs of life and family to which they're loyal, and they virulently hate contrary ways of life, such as the LGBT community's. Their Sharia Law is entirely different from ours, and it tells followers to eliminate us.

We in the West treasure our principles of individual freedoms and rights, along with legal principles like the presumption of innocence until guilt is proven; and the differing degrees of criminal intent, or lack thereof. Also, God's grace, our ideal of generous forgiveness, rankles our enemies. These are alien ideas to many Easterners. There are exceptions, of course, but they're small.

The two Koreas are prime examples of global East-West tensions. Korea after WWII was a single, backward, and poor land of peasants until it was partitioned by the U.S. and the Soviet Union along the 38th parallel in 1945. American resources, ideas, and culture poured into South Korea; while Marxist-Stalinist communism and collectivist ideals inspired a government in North Korea.

In 1950, the North invaded the South, murdered tens of thousands, and nearly crushed it. The Korean War began with American troops and UN assistance reinforcing the South, and the Russians and Chinese pouring into the North. A stalemate was reached. A treaty was signed in 1953 ending the war, but numerous peace proposals have been rejected by the North. Since then North Korea has publicly threatened the South with death, almost monthly. Now they loudly threaten the West and Japan with their nuclear weapons and intercontinental ballistic missiles.

The two Koreas today are like night and day, literally. Night video taken by satellite shows South Korea as a carpet of colored lights, while the North is a black hole with only a few glimmers in Pyongyang, the capitol. South Korea's average wage is over $20,000 a year; the North's is a tiny fraction of that. A huge prison population toils as state slaves. (The view from space)

Much of the violence, murder, and mayhem in the world is caused by Medieval religious beliefs and atheist communists clashing with our modern Judeo-Christian foundational principles. The West's successes only fuel the rage and envy of those who hate those principles. Our belief in the equality of the sexes and races, children's rights, separation of church and state are anathema to more than a billion Muslims. Hundreds of millions of them have declared war on the West. Whether they personally want to pick up arms or not, they've agreed with each other that a final conflict is inevitable. We must submit or perish. What will you do?
The idea that all citizens of the world should be equal in status, wealth, talent, and health is terribly wrong-headed. We have free will, and that means we often make bad decisions. We learn from them, too.

We self-select, and those of different talents, temperaments, levels of intelligence, and personalities want to be with those of like mind. We're happiest when we're free to use our God-given talents and abilities along the lines of excellence.
Look at the animal kingdoms of land, sea, and air. Nature is filled with variations, and hierarchies are woven into all the patterns of life. Societies that enforce conformity and their own twisted notion of equality are unnatural, have been tried throughout history, and have failed every time.

There will never be a foolproof, one-size-fits-all world system, and misery will be the result of all attempts to create one. Charity is Godly when we do it freely out of love. A threatening state that takes your wealth and distributes it in the state's name is evil. Jesus said, "For the poor you will always have with you, and you can do good for them whenever you desire, but not always will you have me." - Matthew 14:7

A government big enough to give us what we want is strong enough to take it all away, like a parent. Do we want to live like children? 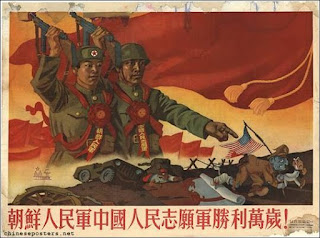 Propaganda poster showing a North Korean soldier side-by-side with a Chinese, expelling the imperialist Americans.
Posted by Gregory at 9:04 AM