Have you ever seen an illustrated medical book that shows the hundreds of diseases and maladies that afflict the human race? It's unsettling, and can be frightening if you have the least sense of being unwell. You may begin to feel symptoms of cancer, heart disease, or plague. Our minds are designed to respond strongly to images and words, and are vulnerable to hysteria; which is contagious. When large numbers of people begin thinking a funny smell may be toxic, and respond to each other's fears, panic often takes hold, and fleeing people can be injured or killed. Hence we have a legal definition for criminal incitement: "Never yell 'fire!' in a crowded theater."  Mass hysteria can kill. (Link)

Similarly, the more people begin to believe in the hopelessness of our present global situation, the rampant murder and mayhem we see in failed states of the Middle East, Africa, and elsewhere, the more we may suffer a form of hypochondria (the belief that all humanity is doomed to misery and death); even if we're personally healthy. Hypochondriacs become alarmed at the most minor symptoms and suffer panic attacks, thinking they have, or are about to be diagnosed with, a serious illness. (Link)

Our present global dilemma is indeed very serious, but the peoples and cultures causing terror, chaos, and war are a minority. If the sane and intelligent majority of global citizens put aside their selfish, petty rivalries and worked in unison, the situation would improve. "The only thing necessary for the triumph of evil is for good men to do nothing." - Edmund Burke

The ability to be faithful to your principles of moral right and wrong, regardless of the danger to your life, limb, or fortune, has always been the mark of the heroic individual. From the beginning of civilization, such heroes have been celebrated and honored. Even today, films like Star Wars, The Avengers, and The Hunger Games, are the highest-grossing global hits. Regardless of culture, humankind has recognized courage and honor. Until now. There are powerful, global cultural currents today that want you to believe someone else, the government usually, will take care of you. They're telling you to disarm and surrender. (Link)

Societies globally are becoming more hysterical and fearful every day, thanks to radical politics, the internet, and social networks. Many politicians are masters of crowd manipulation, and know how to provoke and exploit a crisis and the hysteria that follows. They will invent a crisis if one isn't available, and the media will parrot it. Additionally, there are countless thousands of delusional web sites and videos on the internet which appear genuine to the young and gullible. Did you know the Nazis set up bases on the moon in 1942? (Link) Or that the CIA created Al Qaeda and ISIS to divide and conquer the oil-rich nations?  (Link)  Many people believe these nightmare fantasies because the internet says they're real. "You can't believe everything you read on the internet." - Abraham Lincoln, 1868. (Link)

Exposure to mentally unhinged people and bizarre conspiracies can shape our minds at the unconscious level, and influence our dream world in negative ways. All of us have nightmares on occasion, which often feel very real, and they're made worse by societal decay. They may then become reality. Whole nations can suffer nightmares, and many are suffering now.

Renowned classical historian Alexander Pope said in 1711, "A little learning is a dangerous thing." Education is a lifelong pursuit, not a quick-fix. Unless we master critical thinking and the skill to ask intelligent questions that challenge false and idiotic ideas, we will succumb to dangerous and deadly beliefs. The witch hunts of past centuries, the Spanish Inquisition, and the Terror of Revolutionary France in the 1790's are indelible examples. In our so-called 'modern world', Communism, Nazism,  and other forms of religious fanaticism have killed hundreds of millions. (Link) Mass delusion stems from ignorance, pride, and frailty.

Human nature changes only glacially, as shown by the Bible, Homer, Livy, and Shakespeare. The Pharaoh Ramses, King Minos, and Richard III are separated by millennia, but think and act similarly. Knowing this eases our minds, and the myth of 'progressivism' in human nature is put in its place. Our attempts to reform government - no matter how well-intended or executed - will never replace God in our lives. Reading the great works of past ages is healing, and it puts our lives in perspective like nothing else will:

"What has been will be again,
what has been done will be done again,
there is nothing new under the sun"  (Ecclesiastes 1:9)

Our unraveling world with all its chaos and violence is just a large-scale rerun of human history. People aren't behaving any differently than they always have. A wise individual once said, "Never blame malice for what can be easily explained by conceit." (Link) People are self-absorbed to a large extent, and don't consider the consequences of what they do. Empathy is not a common virtue, and those who have it use it sparingly. It takes real effort, and often expense, to extend our compassion in that way.

Even Jesus was irritable and short-tempered some of the time. In the New Testament, John 2, there's a scene known as the Wedding at Cana. Midway into the celebration, Jesus's mother tells him that the party's wine supply has run out, a Jewish cultural faux pas that will haunt the betrothed couple for the rest of their lives. Jesus snaps at his mother, "Woman, what does this have to do with me? My hour is not yet come" (referring to his crucifixion, and calling her "woman"). Soon, though, Jesus recovers his empathy and instructs the servants to fill the many wine jars with water. He transforms the water into wine that's as fine as anyone has ever tasted. (Link)

All the extreme behavior we see in the world today, good or evil; no matter how inspiring, shocking or disgusting, has (on a small scale) happened before. Our present crises were foretold long ago. The enduring, root cause of most suffering is selfishness, pride, and a lack of faith in God. But this world will be transformed. Our present nightmare, like all nightmares, we will awaken from. 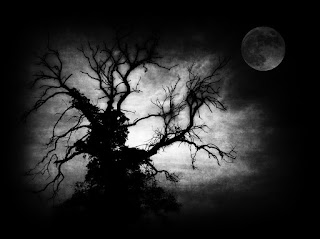