Beware of False Accusers, and Face Them

Never apologize for behavior that isn't clearly wrong, either. It's fashionable these days for crooked people to shame innocent people into apologizing for trivial speech or behavior. An apology will only encourage these crooks to push for more.
Have you ever been accused of wrongdoing that you knew goes against your character, and about which you have no memory? Such false accusations can be alarming and worrisome, so it's very important to reply immediately and declare them false. The accuser may only be exaggerating. Ask questions and demand proof. We have a right to confront our accusers. Don't accept an accusation second-hand. Find out the whole truth and own up to any part which may be true, for doubt can eat away at you and those who may come to your defense. Don't take any blame that isn't documented in a valid way. We're entitled to the presumption of innocence until misdeeds are proven. Serious accusations require serious evidence. Lies of all kinds threaten civilization, and will destroy it if not defeated:
Occasionally we're the subject of slander or malevolent gossip and there is no clear accusation or evidence. The rise of social networks has fueled a great many examples of character assassination. There isn't much we can do about an organized attack of this kind, so it may be best to laugh it off and ignore it. The more there is, over time, the less credibility people will give it.

We're living in a depraved age of declining standards of honesty and character. Godless and malevolent people need and create scapegoats. Blaming others makes them feel superior and powerful. Very often it's projection (Link), and you may find yourself being accused of the very thing those people or societies are guilty of themselves. In many cases false accusations and slander are used as a tool to steal property from victims. It's an effective form of blackmail. When the Jews were singled out by the Nazis, massive amounts of money and property were stolen from victims. Police states and wars are extremely expensive and inefficient, so the search for plunder is an ongoing and perpetual theme in tyrannical societies.

Children and the aged are the least able to defend themselves, the most vulnerable to false accusations; and the damage caused may be very severe. So it's essential that we help them if we can. Recognize and face these attacks with firmness and courage, especially if the accuser is a relative or old friend. This is no time to be passive or soft. Silence is often seen as acknowledgement of guilt.

We are engaged now in a global civil war to determine who is worthy to stand before the Creator of the universe. God approaches: "But who can endure the day of his coming? Who will stand when he appears? For he is like a refiner's fire, or a launderer's soap..." (Malachi 3:2). The earthly battle before us is critically important, the culmination of a conflict that has taken many thousands of years and millions of lives. It's all part of prophecy, a master plan for the world, and we may live to see its final resolution.

Fierce persecution by the enemies of God is one of the risks we face by taking God's side. Jesus warned all who came to Him that this price must be paid: "Then you will be handed over to be persecuted and put to death, and you will be hated by all nations because of me. At that time many will turn away from the faith and will betray and hate each other. And many false prophets will appear and deceive many people. Because of the increase in wickedness, the love of most will grow cold. But the one who stands firm until the end will be saved." (Matthew 24:9-13). The last decade has produced more persecution of Christians than at any other equivalent time in modern history: (Link)

"If the world hates you keep in mind that it hated me first. If you belonged to the world then it would love you as its own. As it is, you do not belong to the world, but I have chosen you out of the world. That is why the world hates you... A servant is not greater than his master. If they persecuted me, they will persecute you also. If they obeyed my teaching, they will obey yours also... Whoever hates me hates my Father as well. If I had not done among them the works no one else did, they would not be guilty of sin. As it is, they have seen, and yet they have hated both me and my Father." (John 15:18-19, 23-24). 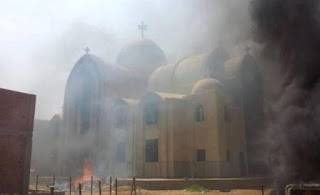