The Dark Night of the Soul

St. John of the Cross (1542 - 1591) was a Spanish mystic, a Carmelite friar, and a priest who was illegally tortured, starved, and imprisoned by rebellious Catholic authorities who resented his attempts to purge corruption from their church.  Along with St. Teresa of Avila, John worked to return genuine spirituality to a Carmelite order that had become wealthy and unholy. He was publicly beaten, fed only a little bread, water, and salt fish, and imprisoned for nine months in a six-by-six-foot cell. He experienced a spiritual breakthrough that changed his life forever; peace, expansion of consciousness, and joy blossomed within him which conquered all his fears. It was then, too, that he found a way to escape.

Back among friends, he went on to write Dark Night of the Soul, a powerful and transformative work that spells out what happens to us as our worst fears are realized. When we are humiliated, in pain, suffering most; finding no comfort in our faith, none in our daily living, and with the terror of nothingness staring us in the face, we are in that dark night. This is spiritual death, when the power of God is most active and faith is most rewarded.

If we don't give in to panic at that moment of terror, a transcendental light will enter our mind and heart. Truth is, our lives are actually a kind of darkness that will never satisfy us for long. The personality we are, and know, and have built for ourselves since childhood, cannot survive great suffering and death. But our soul and spirit can, and will, if we allow it.  The true eternal light of God - the Lux Aeterna - reveals that we live in the transitory darkness of this material world, which is "...the valley of the shadow of death..."(23rd Psalm).  Jesus said, "I assure you, most solemnly I tell you, unless a grain of wheat falls into the earth and dies, it remains one grain, and nothing more, by itself alone. But if it dies it produces many others and yields a rich harvest."  -  John 12:24

The dark night of the soul causes the husk of the "grain of wheat" to split, and the seed sprouts, sees a new light, and takes root in the world. This is the meaning of Jesus's parable, revealing the point of our sufferings, the purpose served by our trials and tribulations. To prove it, Jesus allowed himself to be crucified, and proved by his resurrection that this is the way to salvation.

The dark night of the world's soul descends on us now, as savage killers - nourished  by the world's  corruption - ravage the globe and wreck entire economies. But God's purposes cannot be denied or thwarted. We are not all martyrs, and many of us will choose the path of self-defense, and taking up arms against the enemy. This too is a calling. 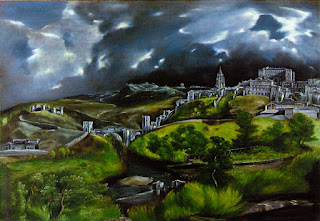