The Universe Created Itself? Are Scientists Serious?

Yes, most scientists do believe this. But we conscious beings who are  capable of understanding the universe owe it to ourselves to ask whether this is probable, and if so, how likely? Our cosmos-given brain sees and knows that nothing in our world creates itself, and all complex things generally require vigilant and constant oversight in order to thrive.

When we contemplate the visible cosmos, a 13.8 billion-year-old creation, our minds are stretched beyond all reason or capacity to grasp such a reality. Even more unbelievable, it's obvious that the laws of physics that Sir Isaac Newton discovered and understood apply everywhere and in complete accord with each other. This is powerful evidence of a great Lawgiver, a Creator Mind who framed the cosmos in mathematical reason and predictability. Gravity, inertia, light speed, thermodynamics, and other laws have worked exactly the same way since the beginning; the so-called Big Bang.

Scientists largely agree that our material universe was created in a single burst, and from a single point, when time and space came into existence. The light from those early millions of years can still be seen by powerful telescopes. Moreover, it's expanding and accelerating. The farthest galaxies are traveling outward at nearly the speed of light, 186,000 miles per second.

In just the last 450 years we've discovered how to make lenses that show us these perfect truths. We're part of a Divine Plan, where, through humankind, the cosmos discovers itself. This is more evidence of the almost inconceivable intelligence that guides us.

Additionally, the Table of Elements, and the electro-chemical makeup of their interactions, is exactly the same everywhere we look throughout the universe. Link
We know that these elements - iron, hydrogen, nickel, helium, sodium, gold, etc. - are found throughout the cosmos. When stars consume and/or create them, they leave a distinctive color-signature in starlight, a fingerprint of proof. Again, this is perfection beyond comprehension. 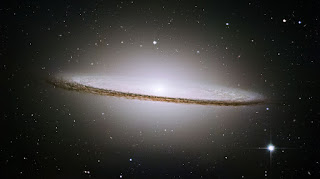 The Sombrero Galaxy consists of about 300 billion stars. Just one galaxy among trillions.

But the night sky and telescopic images are only the visible surface of Creation. Going the other way, smaller and smaller into the fabric of matter, there are invisible worlds almost too small for us to believe; the sub-atomic realm of particles and energies that make the atom seem giant, like Jupiter next to a grapefruit.  Link
At this level, all the large-scale Newtonian laws don't apply, and matter does bizarre things that beggar the imagination. Sub-atomic particles behave in lawless, magical, and chaotic fashion. But the chaos has patterns, too, another conundrum of serious magnitude.

Additionally, science now knows there are multiple dimensions, vast worlds-within-worlds that we can't imagine, which interpenetrate us, and whose strangeness is almost frightening. Sir Arthur Eddington, one of the most important astrophysicists of the 20th Century, said, "Not only is the universe stranger than we imagine, it is stranger than we can imagine."  Link
Much of what was once science fiction is becoming science fact.

Isn't it worth the effort to try and connect with the Creator of all this? Millions have testified throughout history that it's possible, and that God is anxious to show us things that are not only beautiful and astonishing, but satisfying beyond all worldly things. This God gave us curiosity, brains, and a heart to help us along. It's a journey like nothing else on earth. You don't even have to give up all your worldly goods. Start with a request, and see how it goes. You may be surprised.
Posted by Gregory at 10:45 PM